Rep. Issa: US withdrawal from Afghanistan a ‘political failure,’ not a military one 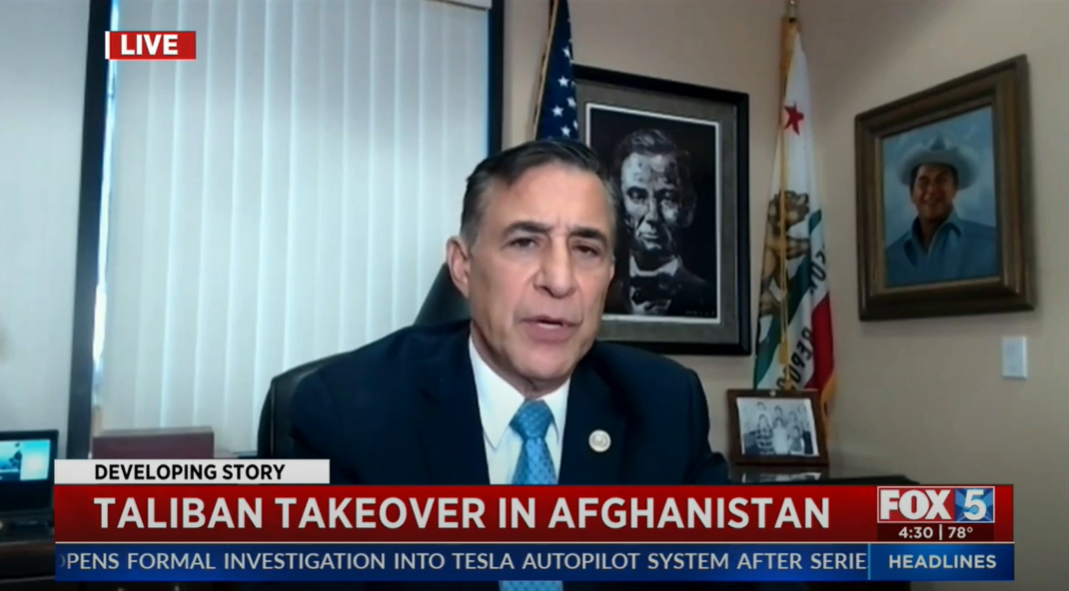 SAN DIEGO – Republican congressman Darrell Issa called the execution of the withdrawal of U.S. troops from Afghanistan a “political failure,” taking aim at decisions made by the Biden and Trump administrations for setting a timeline to leave amid a Taliban takeover in the country.

In an interview with FOX 5, Issa, who represents California’s 50th congressional district, commended President Joe Biden for saying “the buck stops with me” on Afghanistan, but argued that Biden’s hands were not tied in how troops departed the nation. On Monday, Biden defended his decision to withdraw the military from Afghanistan with his administration announcing it will deploy some 6,000 troops “to assist in the departure of U.S. and Allied civilian personnel.”

Issa said the U.S. could have declined to signal a timeline to the Taliban for exiting Afghanistan, left air bases open to provide “air cover and protection” and planned additional exit capabilities for people in the country.

“It’s not about leaving,” Issa said. “There’s bipartisan support that we weren’t going to stay there forever. But the process and the timeline and when it was done and how it was done and the failure to plan to take care of these people who are now being slaughtered, that part bothers me because it didn’t have to be this way.”

Both Biden, then serving in the U.S. Senate, and Issa, formerly of the state’s 49th congressional district, voted in favor of authorizing military force in Afghanistan following the terror attacks on Sept. 11, 2001. As vice president, Biden argued for scaling back the military entanglement in the country and as a candidate in 2020 said he would bring American combat troops home in his first term.

Biden also was critical of the Trump administration Monday, which previously announced the U.S. would pull all military forces out by May 2021.

In June, former President Trump took credit for starting the process to remove troops from Afghanistan, but also in a Sunday statement said that Biden should “resign in disgrace for what he has allowed to happen to Afghanistan,” among other reasons.

The Associated Press reported Monday the U.S. government spent $837 billion fighting the war in Afghanistan and some $145 billion trying to rebuild the country and develop military and security forces. More than 2,400 American service members and more than 3,800 U.S. contractors were killed in the conflict in addition to tens of thousands of members of the Afghan national military and police and the nation’s civilians, according to the AP.

Asked what previous presidents as well as Biden could have done differently, Issa said that the U.S. made “a serious miscalculation” under former President George W. Bush by going in “and getting sucked into nation building.” He argues American forces should have “limited our intrusion” to take out the former leader of al- Qaeda, Osama bin Laden, while providing a chance for young men and women in the country to live a different life. But that’s also where mission creep began in the country, he said.